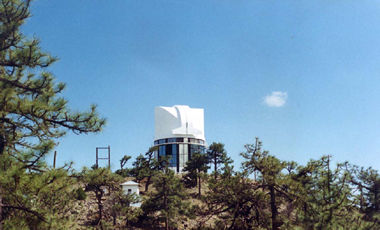 The OAGH has made a great contribution to Mexican and world astronomy, in addition to this, the project has achieved full participation of Mexico in designing and construction of a 34 ton telescope and in observatory development. Guillermo Haro (project promoter), Braulio Iriarte, Enrique Chavira, Luis Carrasco and Octavio Cardona have all participated in this astronomy aspect.

The participation of technicians and researchers from the INAOE Optics Coordination was fundamental in the elaboration of the telescope’s optic components. The mirror polishing and sculpting machines were designed and built in the Optics Workshop along with the necessary testing tools for the telescope’s optic system. The people that participated in this five year process were: Daniel and Zacarías Malacara, José Castro, Roberto Noble, Jesús Pedraza, Arquímedes Morales, Oswaldo Harris, Jorge Cuatle, Carlos J. Martínez and Alejando Cornejo.

The telescope’s mechanical mounting was deigned by the Rademakers Company of Holland, the rest of the built parts were made in Germany, Italy and in the United States. Most of the telescope was built by the De Bartolemeis Company in Lecho, Italy. The building and dome that protect the telescope were both made in our country with the participation of Carlos Palafox, José Luis García and César Arteaga from the Construmetálica, S.A. Company of the capital city. Eng. Montaño of Agua Prieta, Sonora had an important role in the building’s construction. The dome’s rotational system was designed and built in the INAOE’s Mechanics Workshop in which Engineers Salazar Polanco and Alanís participated.

The Microprocessors Lab of the Electronics’ Coordination designed the telescope control console. This completely computerized controls can position the telescope with a 0.5 arcsecond precision. In the beginning, this task was supervised by Eng. Eduardo de la Rosa and later, by Jorge Pedraza (Graduate of the INAOE Electronics’ Postgraduate).

The Observatory’s inauguration ceremony was held on September 8th 1987, in Sierra de la Mariquita (Cananea, Sonora), this is how its important scientific work started and it continues to date. 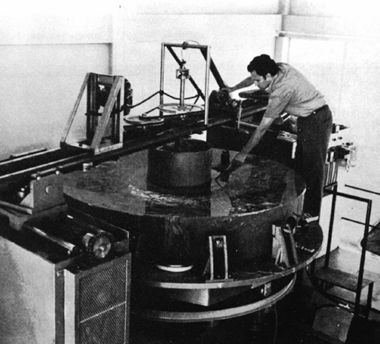 This work is licensed under a Creative Commons License Attribution-Noncommercial-No Derivative Works 2.5 Mexico.